Today, we take a look at Chapter 1 (except the fetishism sub-section) and try to faithfully summarize its contents. Our challenge is to do it under the 1000-word mark. Here we go. 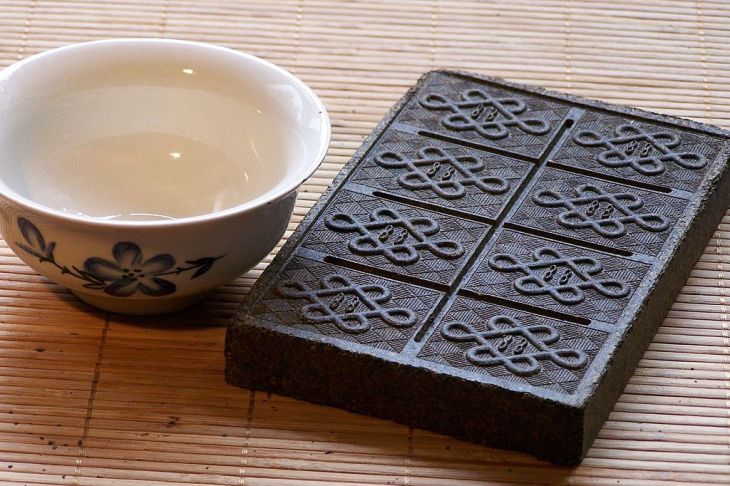 A one pound brick which is scored on the back can be broken into eight smaller pieces.            Credits: Wikimedia Commons.

That’s a tea brick. It can be used to… make tea. It was also, in the past, used as a form of currency. Fundamentally to Marx, it’s a commodity. Let’s break that down and explain.

On the one hand, as an object with which we can (in combination with hot water) make tea, it’s what Marx calls a use-value. Its usefulness, he says, is determined by the properties of its body; its body is thus a material support of its usefulness. What is usefulness? Simple: it satisfies a human need (of fantasy or of stomach, as he says).

On the other hand, the body (of a thing) as use-value is also the material support of exchange-value: I might trade 1 kg of tea for X amount of bread. This really bothers Marx: how do I know how much bread I can get for 1 kg of tea? Just look on the market? Supply and demand? OK, but why is it that price on the market? Why do prices go up and down? In other words, even if supply and demand are in balance, why is it one price instead of the other and why does the “stable” price still fluctuate with time?

The problem gets worse: 1 kg of tea might be worth X amount of bread, Y amount of shoes or Z amount of paper. So what is 1 kg of tea really worth? Well, 1 kg of tea = 1 kg of tea. But that doesn’t get us very far… except in noticing that what a thing is worth is not expressed in itself, but in relation to another thing; even more bewildering is that it is the quantity of another commodity which expresses how much our commodity is worth.

Oh, and money? We’ll get into the details in chapter 2, but money is simply that commodity whose use-value/body serves to express how much every other thing is worth, by simple social custom.

A commodity only acquires a general expression of its value because, simultaneously, all other commodities express their values in it, the equivalent; and every new commodity must follow suit. (Chap. 1, section C, my translation)

With money out of the way, let’s go back to what we were marvelling about: different relations result in different forms. How does this get us any closer to figuring out what a thing is really worth? Well, first of all, we must admit that a thing isn’t really worth anything unless it’s in relation to another thing which can express what it is worth. At this point, we can ask a somewhat smarter question: how does the other commodity(-owner) know how much the thing it is expressing is really worth?

We know that qualitatively, tea and bread are very different: different nutrients, molecules, materials and… ways of making them. But bread and tea and any commodity is the result of work put into it: even an apple, randomly growing in a fictitious virgin nature requires work to pick it, (wash it?) and if you don’t immediately eat it, transport it and store it.

If then, use-value is the body of a commodity in all of its qualities and particularities, exchange-value and its quantitative dimension depends on the diverse bodies of commodities having one thing in common: being products of human work. This, as an abstraction, is what Marx calls value.

But remember the importance of relationships. This means that you can’t just go to the market, tell your buyer that you put more work into it than your competitor, and expect him to pay more for essentially the same quality of a thing, simply because you took more time to inflate the value of your thing. Indeed, value, itself an abstraction, is also subjected to the rule of competition, and for Marx, this means that value is not how much time a particular person puts into making a commodity, but rather how much time is needed on average for making a commodity:

The labour time socially necessary is that required to produce an article under the normal conditions of production, and with the average degree of skill and intensity prevalent at the time. (Chap 1, Section 1, .org translation, my emphases)

This leads us to an interesting remark. Marx is often criticized for being too materialistic, for granting material considerations too much importance. In this last quote, we do indeed see him make an argument for value being fundamentally dependent on the productive forces of work (skill, intensity, efficiency, etc.), which more often than not are substantially changed by nothing other than tools/machines.

But the consideration we have granted to another aspect of the constitution of value, the aspect of relationships, can do much to counter-balance this materialist perspective and to even out what might become exaggerations: value is only expressed within relationships between, ultimately, people.

Social relations as such are thus as crucial as any material considerations: some practices which were previously the object of monetary negotiations (eg. the giving of women in marriage) can become something else entirely (eg. marriages of love), while things which were previously not the object of monetary negotiations (eg. education under the Church) can become very onerous enterprises (eg. university in the US).

In his characteristic way, Marx illustrates this point by targeting bourgeois economists who tend to think that a price can be put on everything: “to imagine that everything can be transformed into an immediately exchangeable commodity is the same as to imagine that all Catholics can be popes at the same time”.

What Marx defines as value has been called the Labour Theory of Value: [3].