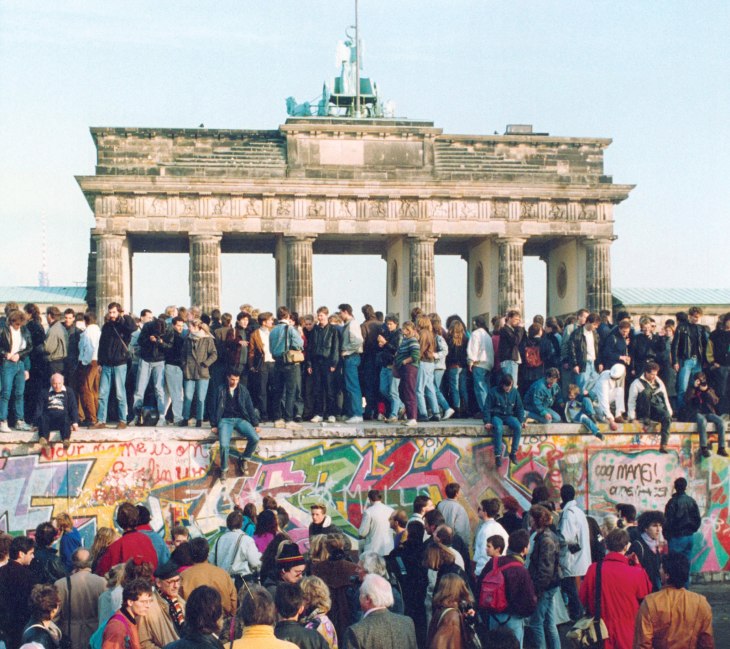 That’s the Berlin Wall, on November 10th, 1989. A day before, the East German government had announced, in an infamous press conference, that all Eastern citizens were to be granted passage towards the West, effective immediately. This caused quite a commotion in both East and West Berlin, and eventually, soldiers at the checkpoints gave in and the crowds could move as they pleased.

Pictures of this event are quite numerous; they serve as a symbol of the fall of East Germany/German Democratic Republic (GDR) and, often, they also serve as the representation of the more general fall of the European communist bloc. Today, 30 years after the event, I looked for media articles about it, expecting to find “celebratory” articles. I was surprised because mainstream media seems to be towing one of two lines: some, like the NYTimes, the Washington Post or CNN have lukewarm headlines and very moderate praise of the economic progress in the territories comprising the former GDR; other, like Reuters, are completely ignoring the event.

I did, however, come across some articles from Le Monde Diplomatique, and I would like to share some of the findings therein reported. I often take a look at their articles, because they are quite detailed and cite a lot of first-hand sources. Their secret is in not taking the tree for the forest, and I greatly appreciate their editorial line of always keeping the bigger picture in mind. 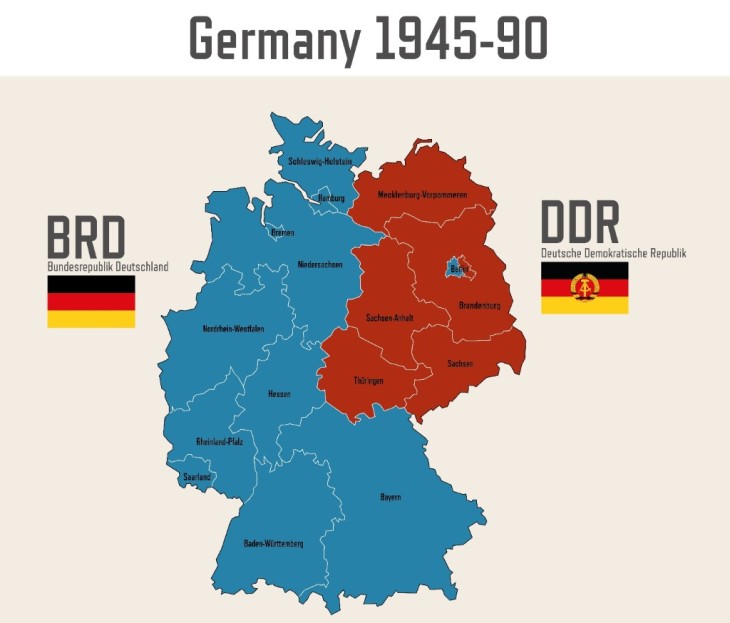 As you can see, Berlin was part of the GDR, with West Berlin acting as an “enclave” of Western influences. Today, Germany is a unified country; one question is how this unification was actually undertaken. This question becomes more interesting in light of the lukewarm and unconvinced articles I cited above: it seems that inside unified Germany, something is pushing voters, especially in the former GDR, to vote for the AfD, described on Wikipedia as harboring neo-Nazi and hard-line racist elements. Remembering the Nazis were still in power 75 years ago in Germany, it’s hard to accept that Germans are voting for the extreme-right again just because they have a short memory or because they are inherently racist; furthermore, it is almost as hard to justify this voting pattern by citing the immense refugee influx because the states where the AfD collects the most votes (Mecklenburg-West Pomerania, for example) are those where the proportion of foreign residents is smaller than the national average (4% in Mecklenburg-West Pomerania versus 11% nationally).

There is another hypothesis, more plausible and supported by historical data: the AfD is feeding off of the 1989-1990 reunification of Germany, a successful attempt to brutally privatize the State property and wealth of the GDR, leading to the almost complete appropriation of formerly GDR-collective-capital by West-Germany private property owners. This is a story familiar to all of the formerly communist countries of Eastern Europe, and here are the facts that support that story in the case of the former GDR.

First, it is important to highlight that in a survey by Der Spiegel (18 december 1989), 71% of the former regime’s opponents wanted a democratically-reformed GDR, not unification with the Federal Republic of Germany. This echoes a speech given on November 4th of the same year (quoted by Le Monde Diplomatique):

We Germans have a responsibility to history to show that true socialism is possible.

However, elections in March of 1990 brought to power the CDU (still in power today), who promised (in unison with West Germany’s Helmut Kohl) a monetary unification, whereby the Eastern citizens could turn in their currency for the West’s currency in a 1:1 ratio, in a situation where the Western currency was worth 4.4 more than the Eastern currency. Undoubtedly among the people of the East who had, for the most part, known quite a bit of material discomfort, this was a highly advantageous proposition. Unfortunately for them, once this monetary unification was achieved, real prices in the East rose between 300% and 400%, quite perfectly annulling the whole benefit of the deal.

This is in accordance with Marx’s own theory of currency, by the way. In Chapter 3 of Capital (Money, Or the Circulation of Commodities), Marx tells us that the separation between metallic content of gold-money (the weight of the gold) and the functional content of gold-money (its use as a means of circulation) is revelatory of the possibility of replacing gold-as-money with paper bank notes. But even by replacing money valued in gold by fiat money (essentially valued in trust), it doesn’t mean you can suddenly arbitrarily control prices established by the fundamental relation of market-exchange: “the issue of paper money must not be disproportional in the amount of gold which would actually circulate if not replaced by symbols”. In this case, that issuance was disproportional and guess what, prices rose to more or less the exact same (dis)proportion.

Second, this monetary unification deal came with other conditions: the market economy was to become the “common economic system of the two contracting parties, determined particularly by private ownership, competition, free pricing and, as a basic principle, complete freedom of movement of labour, capital, goods and services (article 1.3). The consequences were drastic (quote from Le Monde Diplomatique again):

The GDR underwent an overnight economic liberalization that had taken postwar West Germany a decade. In July 1990, industrial output had fallen 43.7% from 1989; by August, 51.9% and by the end of the year, 70%. The official unemployment figure rose from 7,500 in January 1990 to 1.4 million in January 1992, but was more than double that when  short-time working, retraining and pre-retirement were factored in. No other country in Central or Eastern Europe suffered more economically by leaving the Soviet Union’s  orbit.

Evaluated at around 600 billion marks, 85% of the collective capital of the GDR was sold to Western companies or individuals at about 2/3 of its value. 2.5 million jobs were lost in what has since been called “the greatest destruction of productive capital in peacetime” (Christa Luft, last GDR minister of the economy).

Third, all of the well-performing economic actors of the GDR were appropriated by Western counterparts: Sero, a national recycling company was broken up and sold to West German companies; the potash mines of Bischofferode were transferred to Western competitor K+S, who then immediately closed them down; the GDR’s Interflug airline’s routes and airport were transferred for free to Western competitor Lufthansa.

This phenomenon gets worse when considering the banking sector. Whereas the GDR measured its subsidies to publicly-owned companies as credit (because these companies then repaid to the State all of their profits), Western-owned banks converted these “credits” to actual loans that the companies actually had to repay, even in the middle of the this privatization shock. The Berliner Bank, for example, bought for 49 million marks debts creatively evaluated as worth 11.5 billion marks. These debts being state-guaranteed, banks went ahead and raised interest rates from 1 to 10%.

Fourth, the material appropriation by expropriation was closely mirrored by an appropriation by expropriation of the cultural and intellectual means of production. This is in line with Marx’s theory of historical materialism, whereby “the class which has the means of material production at its disposal, has control at the same time over the means of mental production, so that thereby, generally speaking, this class exercises its power on the ideas of those to whom these means are lacking. The dominant ideas are nothing other than the expression of the dominant material conditions in intellectual form, they are these conditions conceived as ideas, as the expression of those social relations which make of a class the dominant class.” (Marx, German Ideology, Ruling Class and Ruling Ideas)

Thus, publishers, cinema, television or radio channels, street and building names disappeared within a few years. Newspapers and magazines were privatized to the benefit of Western publishers. Interestingly, nursing homes and daycares were for the most part shuttered and, at the same time, women were the first to be fired from productive activities. Indirectly, they were thus encouraged to reintegrate the German family model for women: Kinder, Küche, Kirche (children, kitchen, church). The final nail in the coffin of the East-German intellectual class was the liquidation of its research sector: Le Monde Diplomatique cites statistics where its number of full-time research personnel fell from 140 000 in 1989 to less than 38 000 in 1992; during the same period, 72% of scientists stopped exercising their profession and those that did remain had to pass a test concerning their political inclination. 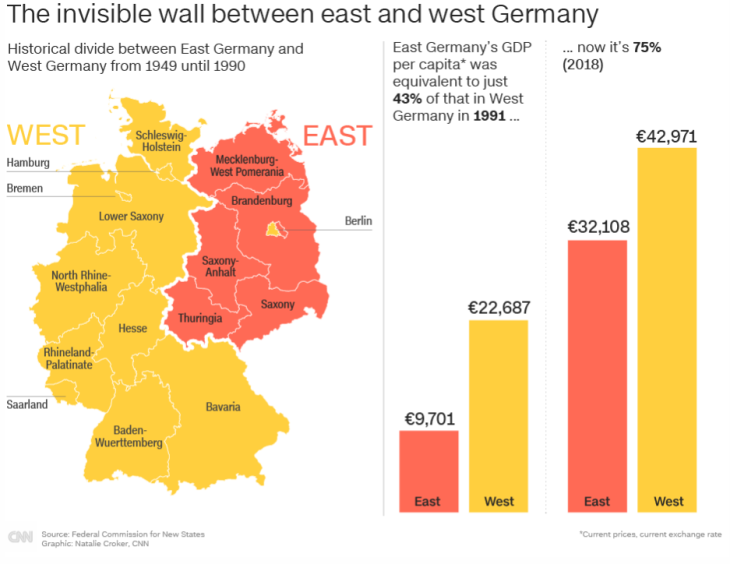 The picture above suggests that, in terms of GDP, East Germany has only somewhat progressed towards a catching-up of sorts to its Western counterpart. It is widely accepted (but not put into application by mainstream media) that there are substantial failings in using GDP as a measure of economic well-being. However, even if we should take these numbers at face value, they suggest that even 30 years on, the events of 1990 Germany continue to exercise their characteristic power.

I am confident that the story of the economic transformations undergone in the 90’s by former communist countries are very similar to the one we painted for the GDR. There are some signs, especially in Russia, of communism regaining social acceptability; but, in many of these countries, and most overwhelmingly in Poland, communism is still considered as a capital sin.

This state of affairs begs the question: if the populations submitted to capitalist shock doctrines are still feeling its disparaging effects 30 years later, while at the same time still abhorring the communist system under which they previously lived, how can socialism, how can the control of the work process and of the work products by the workers themselves become a desirable alternative?

One answer might be to deny this very possibility and to simply commemorate, whether with feelings of nostalgia or of respect, that generation of people who constituted the back-bone of authoritarian socialism and who, often in the dark and in the cold, contributed to the nonetheless massive social progresses of these regimes (public healthcare, universal education, excellence in sports, industrial development, etc.).

Another answer, one I favour, is to remember with Marx that capitalist relations of production are unsustainable, both in the social and, of course, in the environmental sense. In more than one way, the story painted above harks back to what Marx called primitive accumulation: the process by which producers are expropriated from their means of production, sooner or later leading to an obvious-to-all assessment that the wealth of nations is built on the poverty of the people. But Marx argued that this would be achieved at the cost of a centralization of the means of production and at the cost of a socialization of labour which would become incompatible with capitalist social relations. It’s an argument for another day, but I believe that these two processes (centralization and socialization) are well underway. To the degree to which this is true, the expropriation of the expropriators becomes ever more possible.

The main reference for this was the excellent article “The Economic Anschluss of the GDR” by Le Monde Diplomatique.

Accompanying that article are two smaller entries by the same authors, one of which is available in English (In the GDR, Old Debts and Big Profits), the second available only in French (Liquider une société). Also take a look at “The Politics of Emptiness” and at “East Germany’s loyal returnees“.

Britannica photo is from here.

Map of GDR and FDG is from here.

CNN chart is from here.

Failings of GDP is from here.

Der Spiegel opinion poll from 1989 can be viewed here.

Also quoted in the text: Marx’s (and Engels’) German Ideology.

"A Word of Substance"