On January 22nd 1905, on a Sunday, the priest Georgy Gapon is leading around a dozen thousand unarmed protesters to present a petition to Tsar Nicholas II. At this point, workers are living in the difficulties we’ve previously described, but the Tsar is still seen by most as the father of Russian people. In this sense, the political consciousness of the workers is very minimally, if at all, developed: they mostly demand better wages and working conditions. There have been a few strikes before 1905, but these movements were rapidly and violently repressed, strike funds were illegal, and mutual aid funds were barely tolerated: whenever industrial entrepreneurs accepted negotiations, they received worker delegates, but as soon as negotiations were done, the delegates were fired and often even arrested.

Still they came to the Tsar, hoping that the father would hear out his flock. However, little time after arriving in the square of the Winter Palace, the soldiers opened fire and the cavalry charged them: from that point onward, the day would be known as Bloody Sunday. 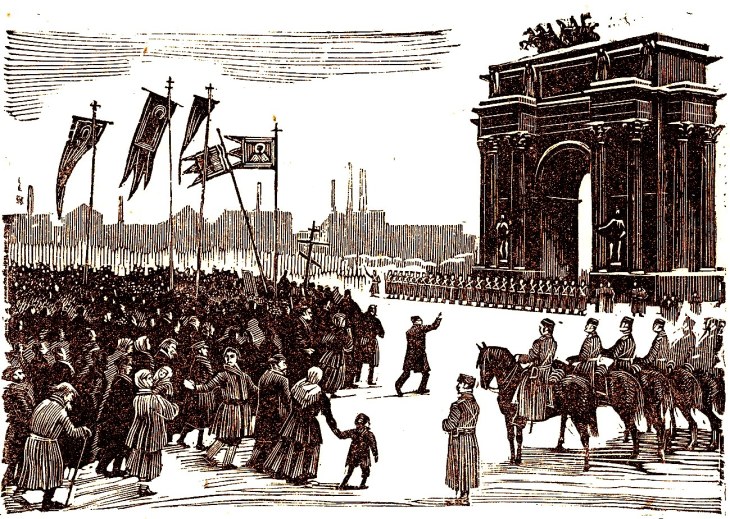 Bloody Sunday had two immediate consequences: 1) the Tsar permanently lost his aura of benevolent father; 2) the workers initiated massive strikes. The number of strikers in January and February 1905 was bigger than the sum of strikes in the 10 years preceding 1905. The 1905 strikes also saw a more important coalition: the factory workers were joined by semi-proletarian workers such as bakers, clerks and municipal employees.

May 1905 will see the appearance of the first soviet. We will talk in depth about its organization and functioning, but first a few words about the origins of that organization. The key-word here is Zubatov, Sergei Zubatov: formerly a member of the revolutionary movement in his teens, he had risen through the ranks to become the director of the Moscow section of the Okhrana, the secret police of Imperial Russia’s Ministry of the Interior.

Zubatov was an adherent to the idea that trade unionism could limit the spread of revolutionary activity. (In “What is to be done?”, Lenin also believes this about trade unionism, which is why he is partially against it.) So he set up a plan where workers would 1) elect factory-level representatives among themselves and 2) send them to district associations whose role would be to receive worker complaints, to monitor the application of government regulation in factories and, if necessary, to negotiate with factory inspectors sent by the government. These district associations would be called soviets, which in Russian means council.

In 1903, the government shuts down Zubatov’s plan, and with it this prototype of a system of proletarian councils. Here, it is worth highlighting the fact that the form of this future kernel of revolutionary activity was established in its generality by a tsarist institution, the Okhrana, whose sole mission was to combat left-wing revolutionary activity. This part of the story is indicative of dialectics as “Aufhebung“, as we see the workings of change (“negativity“) inherently operative in what initially seems as a settled order of affairs: the ruling class is digging its own grave, would say Marx in the Manifesto.

The workers will remember these forms and begin realizing them in 1905, which brings us back to our main story. During the first half of 1905, many spontaneous worker committees start proliferating, but these often only survive a few days and disappear due to a lack of resources or the obtaining of concessions. A few times, these factory-level committees coalition, and this is where we see the first indicators of the soviets to come: a struggle for economic improvements, but with an important desire to unify separate struggles.

The first soviet of 1905 is born on May 15th: on the 12th, some 40 000 workers are participating in a strike in the textile district of Moscow. The government sends an inspector, who accepts to offer the guarantee that none of the workers reps will be arrested: on the spot, reps are elected by the workers.

On May 15 the Ivanovo Voznesensk Council of Representatives was constituted at a session in the city hall at which the factory inspector of Vladimir province took part. He recognized the assembled deputies as the authorized workers representatives and cautioned them to restrict their demands to economic improvement and not to pursue political or revolutionary aims. (Anweiler, p. 40)

The Ivanovo Soviet declares its tasks to be: 1) to conduct the strike; 2) to prevent separate actions and negotiations; 3) to assure the orderly and organized behavior of the workers; 4) to resume work only on the order of the soviet.

The factory owners reject the demands of the workers, on June 3rd the military is called in and violent confrontations ensue. The strike drags on until July 18th, day on which the Ivanovo Council is dissolved. The workers obtain no material improvement, but their struggle leaves a lasting impression on the public because of the unprecedented level of long-term solidarity and coordination.

Over the summer, things settle down for the government: the Tsar announces the creation of an imperial parliament (Duma) as a counseling body; peace is concluded with Japan, who thus wins the 1904-1905 Russo-Japanese war. However, at the start of October, a rumor starts circulating that some representatives of the railway workers have been arrested: it’s false, but the tensions between workers and government are still lively.

And just like that, immense strikes take place, the general strike in St. Petersburg of October 12th being the main event. In these strikes, there is a very large participation of groups outside of factory workers (which we’ve already seen at the beginning of 1905), and this gives the strikes a political character against tsarism as such. We said “just like that”, but in fact we have to take account of the conditions of life of the population, as we’ve described them in our previous piece and in the course of this one: the spontaneous act of concerted action cannot be explained without the miserable salaries and the heavy repression that the workers have endured, repression that has cut short any attempt at systems of representation during the course of previous months.

The strikes are so violent and the social danger is so palpable that on October 17th, the Tsar issues another manifesto (The October Manifesto), in which he enlarges the voting franchise to the parts of the population previously excluded, and in which he grants and guarantees the protection of civil rights such as freedom of speech and of association. On that same day is born the St. Petersburg Soviet of Workers Deputies officially, from factory deputies elected from October 11th onward who decided to reach out for concerted action. 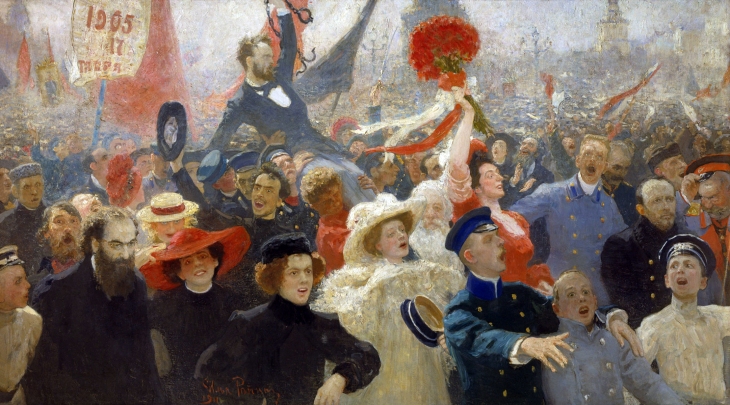 The non-partisan quality of the Soviet (factory reps had to regularly report to their electors and the latter could recall and remove them from their post if unsatisfied) stimulated a total participation on the part of workers: so much so, that the Soviet’s role surpassed that of simply directing a strike. It had to represent all of the workers and transform into a kind of “workers’ parliament”. The organizational structure had to reflect the need to resolve a large number of problems very quickly: there was no standardized voting procedure (about 1 representative per 500 workers), an executive committee managed daily affairs and wrote proclamations and regulations that had to be ratified in plenary sessions, and commissions were tasked with particular questions (strike fund administration, unemployment assistance, weapon procurement, newspaper publishing).

During these October days, the Soviet started exercising revolutionary power, in the sense of managing what was normally considered government work: it decreed freedom of the press, gave instructions to railway workers and postmen, negotiated with the municipal Duma, inundated government with information requests and its militia gave orders to policemen.

These two poles of activity of the Soviet (self-government and revolutionary organ) lead it to impose, on October 26th and 27th, the 8-hour workday. But the following days, employers lock the workers out and fire around 19 000 workers. It’s an indication that the Soviet does not yet wield enough authority, and the government takes good heed of it. On November 26th, the president of the St. Petersburg Soviet is arrested and the reps understand that a conflict with governmental authorities is inevitable, but that they do not yet have sufficient strength to prevail; on December 3rd, the executive committee and 200 Soviet reps are arrested. It is the end of the capital’s 1905 Soviet.

Nonetheless, its 50-day reign leaves its mark. The model of the Soviet is adopted in other cities like Moscow, and also among some soldiers in Siberia and in some very rare instances of peasant villages. These satellite institutions will dissipate quickly after the fall of the St. Petersburg Soviet, but they show that the provinces with the most active soviets are correlated with a higher number of strikers and a greater concentration of strikes.

It will also affect Russia’s Social-Democratic Party (SDP). Illegal until 1906, the SDP sold itself as in communion with the precepts of Marx and Engels’ publications, but since 1903 it had, in practice, divided itself in two: Mensheviks and Bolsheviks. After 1905, the division between the two will cement itself.

On the one hand, Mensheviks said they follow an orthodox reading of Marx, where the decisive social force in the revolution is the bourgeoisie: because of this, workers’ institutions will have to support the bourgeoisie in its fight against tsarism. The endgame being that the bourgeoisie carry out social and democratic reforms, that parliamentary democracy reinforce the SDP by heightening the political conscience of Russian workers, and finally that Russia follow the advanced countries of Central and Western Europe when these latter would begin their socialist revolutions.

On the other hand, Bolsheviks (with Lenin at their helm), urged the Party to prepare a general uprising: to institute the “dictatorship of the proletariat“. In 1905, he wrote that the Soviet of Workers’ Deputies should proclaim itself as the provisional revolutionary government of the whole of Russia, or set up one. Rather than workers’ parliaments, Lenin talks about militant organizations also including soldiers, sailors and peasants, whose final purpose is armed revolt. In 1915, Lenin would write:

A soviet without an insurrection is nothing but a marvelous opportunity to arrest a few dozen workers’ leaders. (Quoted in Anweiler, p. 85)

Still, even after the 1905 events, the SDP is relatively weak in big cities like St-Petersburg and Moscow, and it’s more or less absent from provinces, where the Social-Revolutionary (SR) party qualifies itself as the inheritor of the Russian anarcho-revolutionary tradition, like the “narodniks” who had assassinated Tsar Alexander II. The SR recognized the importance of proletarian movements, but they maintained that the village would have to be the base of a potential revolution, in the form of cooperatives. The SR will maintain a very important influence until the passing of the 1917 October Revolution.

As we now look towards 1917 and the explosive rebirth of the Soviet, the precipitating events of that year are preceded by an electoral reform in 1907, which cancels most if not all of the concession from the 1905 October Manifesto (extended voting franchise, civil liberties). Despite this, there is a calming of the revolt after 1905, especially due to the cancelling of the annual redemptive payments from the 1861 reform (that we discussed in our previous piece in the series) and the excellent harvests of 1908-1909.

However, in 1914 Russia becomes embroiled in what we now name World War 1. For the Tsar personally, as well as for the ruling class of Imperial Russia, this will prove catastrophic.

I draw heavily on the following book:

Also of value, PORTAL and LESAGE’s article in Encyclopaedia Universalis on Russian History.

Finally, one of the Lenin texts published in November 1905, highlighting his views on the whole shebang of that year: Our Tasks and the Soviet of Workers’ Deputies.

"A Word of Substance"